Discover your next meal in our Local International Eats blog! Members of the YMCA Welcoming Week Task Force ate at a variety of local international restaurants and shared their thoughts and opinions, as well as some facts about the restaurants and their owners.

The neat thing about the menu is that they place Mexican Flags by certain dishes to signify that they are very popular and authentic. You can select bottled pop or juice drinks like Jarritos as well. Everything about this restaurant is wonderful. The restaurant is family owned and the staff is so attentive and friendly. This establishment is not only a local favorite, it has brought so much to this community through participating in fundraisers and local events! Please stop what ever you are doing and come and eat here! 5 Stars! ~Emily P. 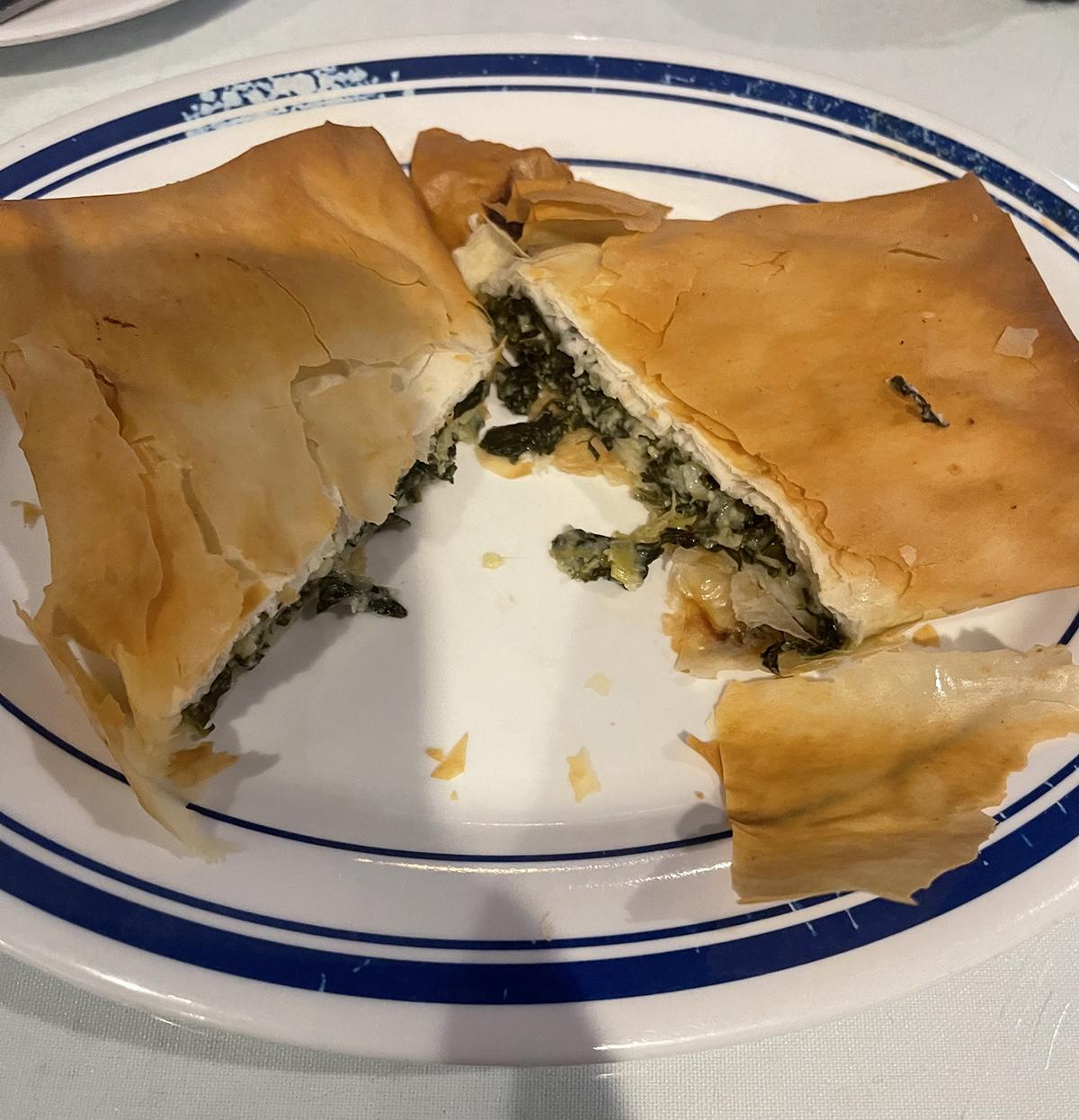 The owners immigrated to Omaha in 1966. They opened Greek Islands in 1983! If you like greek food or have wanted to try it this is the place to go! If it's your first time going for sure get the saganaki (flaming cheese) appetizer! ~Jen K.

First opened in 1989. The Peanut Butter Chicken was delicious! And if you have a craving for peanut butter, this is the perfect choice, as the peanut butter sauce was creamy with just the right amount of peanut butter to help create the sauce. ~Mel T. 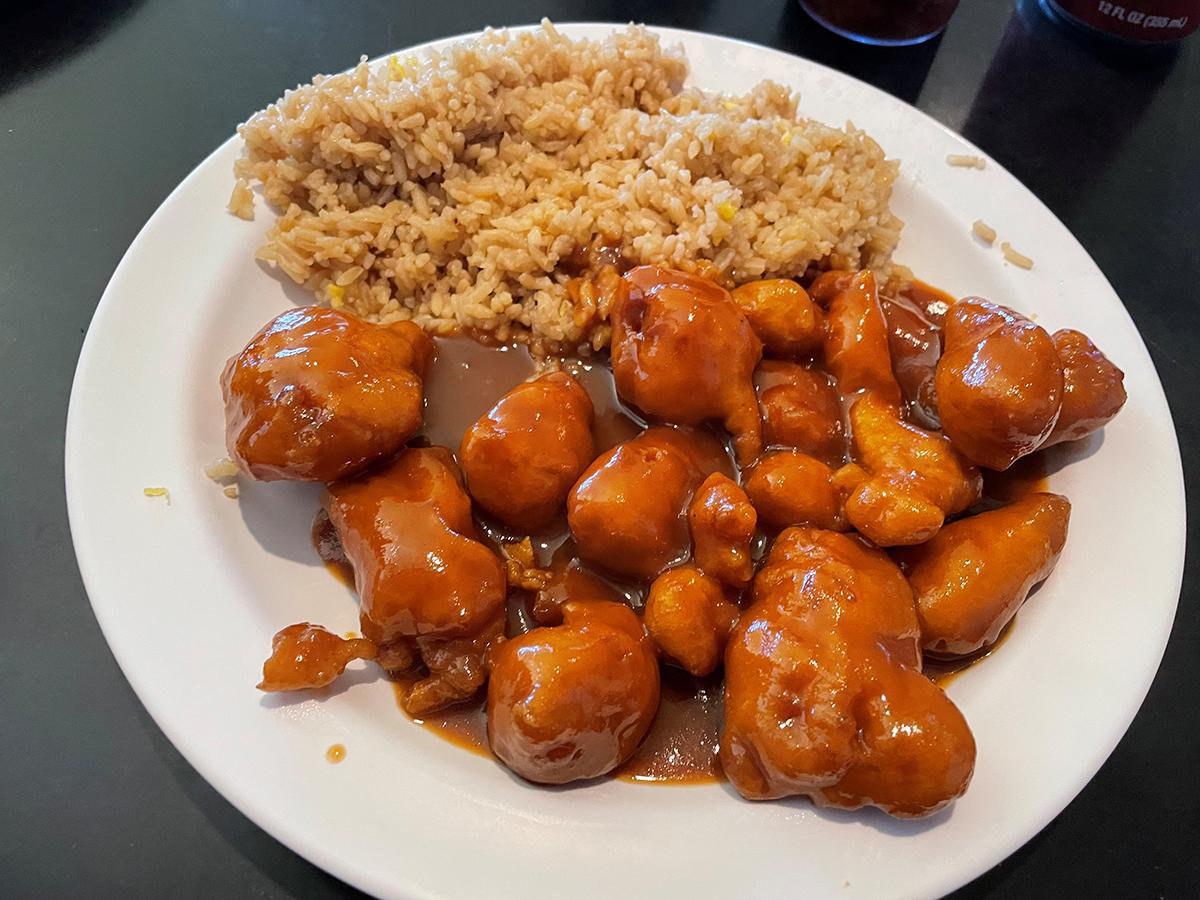 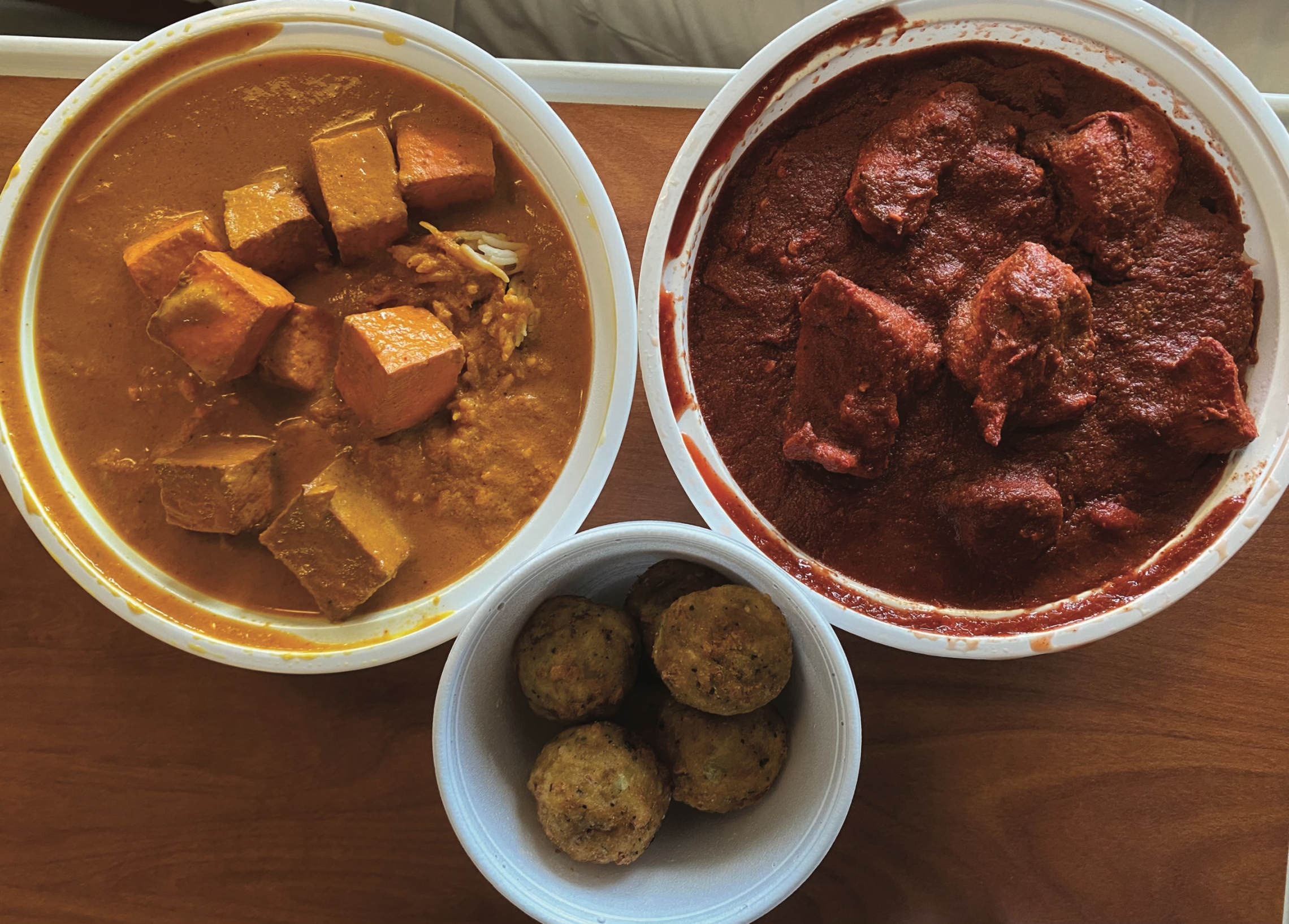 India: Curry in a Hurry

The owner is from Mumbai, India. The restaurant opened just before the pandemic hit. They recently added a drive through and DoorDash was consistent throughout the lunch hour while I was there. As authentic as it gets. Naan bread was excellent and is offered a la carte in case you want to add more on. I tried a combo to sample two different kinds of Curry Bowls. Both dishes were excellent, chicken was tender and perfectly cooked. I am a fan of spicy food, do not take Curry In A Hurry's spice levels for granted. The Malwani (Spicy) Chicken says it right in the name and it means it. I discovered what I can only guess what lava tastes like.
Excellent service, the owner came out and greeted me personally and they bring the food right to your table. As an added bonus you can scan your receipt to TAGG and they will contribute a portion to your favorite Non-Profit (YMCA of Greater Omaha.): https://togetheragreatergood.com/. ~Mike R.

The food was REALLY good! The shrimp curry and beef patty were phenomenal! Both very different than anything I had ever had before. Lots of flavor. You can tell they use lots of different spices and seasonings. It was also neat to see the Jamaican representation throughout the restaurant. For example, they had Jamaican jewelry, clothing, hats, Bob Marley apparel, dvds, and cds. Not sure if anything was for sale or just display, but it was really neat to see them bring their culture to life. ~Christian S.

All of their recipes have been passed down from their grandmother to their mom and now to them. They have 40 plus dishes and a menu that changes for every offering - including various lunch buffets. I really enjoyed this meal - the chicken tikka masala had chicken baked in the clay oven & cooked with spicy sauce with bell peppers & onions - it was very flavorful. Paired with the garlic nan for dipping was delicious. I also tried my Aunt's hakka noodles with chicken and they had so many great flavors, too. The service was good! I have driven past this restaurant several times in the shopping center but hadn't noticed it - I look forward to coming back. ~Sha B. 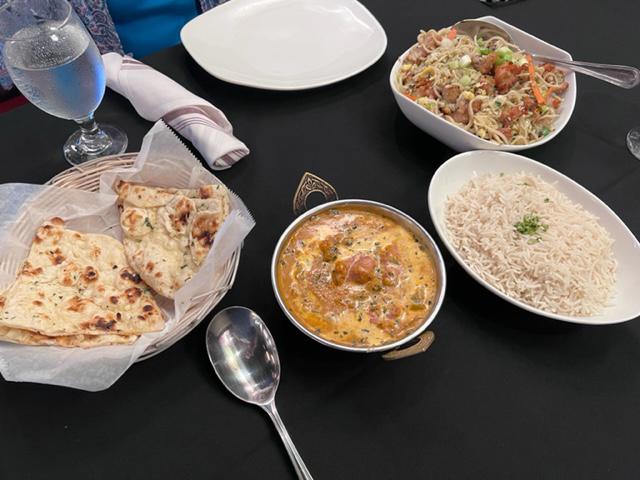 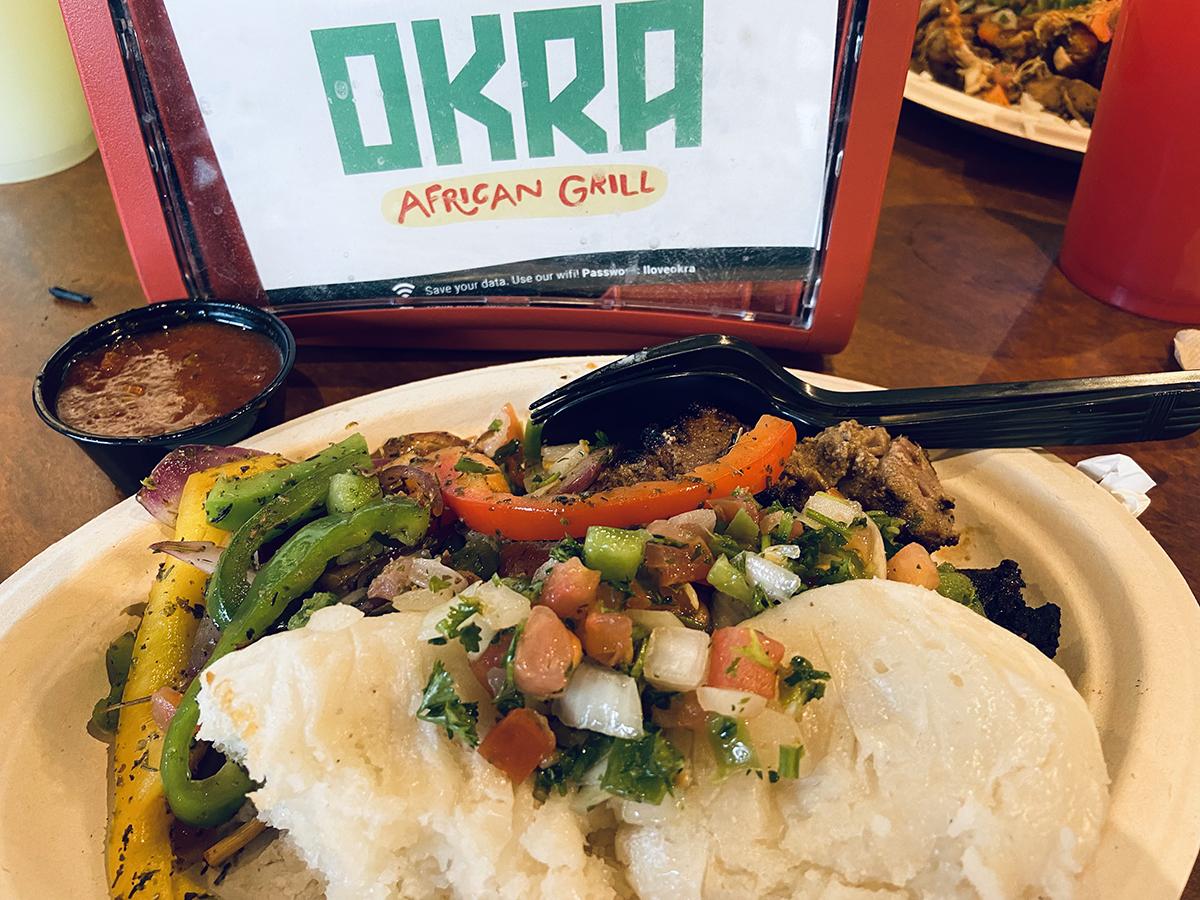 Ablo is a slightly sweet, fluffy rice dumpling. It came with skewers of spiced grilled beef, chutney, vegetables and a tasty tomato sauce. Nina, the owner, immigrated to the US in 1994 from Togo, in west Africa. She went to culinary school at Metro while raising 2 children, with the dream of opening her own kitchen. The foods she grew up with in Togo we influenced by lots of cultures including French, Spanish, German, Indian and neighboring African countries. Okra African Grill is Nina's vision to bring these dishes to life in Omaha. An homage to all African cultures and the transcontinental history that have influenced Togolese foods, her food tells a complex story.

The ablo dumplings were great, but the highlight was the grilled beef with the tomato sauce. The beef was flavorful and just a little spicy. My fellow diners had the Peanut Butter Chicken special with plantains and Nina's Pork Bowl Special that came with black eyed peas. Both really enjoyed their meals as well. Another highlight was Nina's lemonades! I had the ginger lemonade and as a fan of ginger, I LOVED it. We also tried the pineapple mango lemonade and the tropical punch lemonade - both also really delicious. DO NOT WAIT - eat at Okra African Grill. ~Jodi C.

Woman owned business that was opened during the height of the 2020 COVID pandemic. The Naughty Buddha Burger Bar has such a quiet, peaceful, yet very aesthetic space. It was full of fresh items, foods and drinks. The music was very soothing and the fresh water with oranges and cucumber was very refreshing on a hot day. The plant based Naught Buddha Burger was full of surprises! It had the perfect combination of spices, sauces and vegetables. Alongside the special blend of the Bamboo Seaweed Salad that has had sweet sauce glazed over. I highly recommend that if you've never had a vegan meal, the Naughty Buddha Burger Bar is the place to be! ~Sabrina S.